Do you ever wonder why Missouri is so German? This issue we are taking a look at what makes Missouri so German,  then we share several ways to experience the German in Missouri and take a look at how German Missouri is compared to the rest of the U.S.!

Why Missouri is so German

Over 46 Million people in the U.S. list their ethnic background as German. It is still the largest ethnic group in our country. Missouri is one of the most “German” in America, and is part of our country’s “German Belt” across the northern tier. St. Louis anchors the “German Triangle” along with Cincinnati and Milwaukee which has the largest concentration of German culture. Did you ever wonder how Missouri got to be so German?

Part of the Louisiana Territory purchased in 1804, Missouri became a state on August 10, 1821, or 196 years ago. Its’ settlers had been here for decades thanks to trailblazers like Daniel Boone and Jacob Zumwalt.  Both had friends and family whose heritage was German. It came as no surprise when a German named Gottfried Duden arrived to investigate the possibilities for settlement in the fall of 1824. Duden, who came equipped with a professional farmer and cook was a wealthy lawyer with a philanthropic need to see Missouri for himself.

In Germany, the end of the Napoleonic War combined with famine had created severe overpopulation problems. Principalities, Kingdoms and Bergs were needing to raise ever increasing tax money for the King. A growing revolution by young men in fraternities among the Universities was giving rise to an era of subterfuge, censorship and other horrible atrocities. Hundreds of books about emigration were being published but Duden realized that none were written by someone who had ever actually visited Missouri.

From 1824 to 1827 Duden lived with a young farmer named Jacob Haun, whose family had come with those early Boone followers. Duden traveled the state, from Mine a Breton to the Booneslick to St. Louis, while maintaining a home base at a little settlement he called Lake Creek. [Today’s Dutzow across the Missouri River from Washington, Missouri and about 50 miles west of St. Louis.] He recorded his visit in the form of letters and published them in a small book called “A Report of a Journey to the Western States of North America” in Germany in 1829. He recommended that immigrants travel in groups for safety as this was still very primitive and untamed territory. 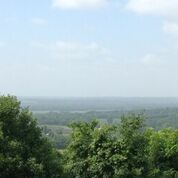 Just the right words at just the right time! He described a countryside that was beautiful and resembled the homeland, and was filled with valleys just perfect for growing grapes. Better than that, the land was inexpensive and there were thousands of acres available. Anyone could buy it! You didn’t need the Kings permission. There was NO King, NO military draft or taxes! No permission needed to marry, move, or travel.  Your children could be educated. You were able to choose your religion and decide who should inherit your property. This was where the “Sun of Freedom Shone”.

During the decade of the 1830s over 120,000 Germans would immigrate to the United States. Of those, over a third or 40,000, would chose Missouri. One-fourth of those would

settle in St. Louis and double its population. The rest spread out across the Missouri River valleys and created what we call the German Heritage Corridor today.  As a result of Duden’s book a majority came in”settlement societies” as he recommended. Those early arrivals would also write their own letters home to their friends and family.  Read in the wine and beer gardens, after church on Sunday, and circulated among their closest friends they urged them to join them in this land of opportunity!

By 1900 St. Louis was one of the most foreign born cities in America, and over half of all of those were German. Many counties and cities large and small were over half German, with many of those already second and sometimes third generation Germans. Missouri became one of the most German states in America. Today we are proud to claim “my ancestors were German!” as they celebrate our heritage in the Oktoberfests, wine gardens, and celebrate German American Day. The Mannerchor, Liederkranz, cultural and heritage societies still exist. Everyone knows “Missouri is so German!”

On Sunday, September 17, 2017 you have the opportunity to join other Missouri Germans, and become a German immigrant for the afternoon. You will be assigned a role

and follow the Boone’s Lick road with others who are making their way west. Hear the voices who settled Missouri’s German Heritage Corridor. Stop and rest in the German village of Dutzow at Blumenhof  Vineyards and Winery and enjoy a German meal, a glass of wine and some music. You will return to St. Charles via Missouri’s first Weinstrasse along the beautiful Missouri River. Sponsored by the St Charles German Heritage Club with partners the Boone’s Lick Road Association the day will be unforgettable. Tickets are $40 per person and may be purchased online at https://www.eventbrite.com/e/german-heritage-bus-tour-tickets-35607650441

In the St. Louis Region there are several German singing societies, a German Genealogical Society, a German School, and even several Stammtisches that meet regularly. Want to know when the next event is? Where to hear the Liederkranz or see the Jungende Gruppe dance at the German Cultural hall? Don’t miss the Oktoberfest and German-American Day at Donau Park!  The German American Committee of St. Louis brings together all of these great events and their sponsors. To learn more and see what is happening visit their website…https://germanamericancommittee.org/