In 1799, the year that Giessen Emigration Society founders Friedrich Muench (1799-1881) and Paul Follenius (1799-1844) were born, Germany was in turmoil. Oppressive governments, kingdoms, and dukedoms all bowed to one King. The success of the American Revolution had sparked similar unrest worldwide. In France, Napoleon marched eastward after success in his home country. As the western border of Germany, Alsace-Lorraine, became overtaken, Germans experienced many new civil liberties that had been unknown to them. Fearing that this would lead to further advancement by Napoleon, the King suggested that if Germany  would defeat the French foe, that these same liberties would be allowed in Germany. Following Napoleon’s defeat though, the Confederation on the Rhine, a gathering of Germany’s rulers, failed to follow through with this promise.

Change had been witnessed, and these strange new liberties had been tasted, and the desire had not left Germany. The youth were not willing to return to the old ways and wanted the changes they had been promised. In the Universities across Germany, young men would gather in their fraternities and make plans. At the University of 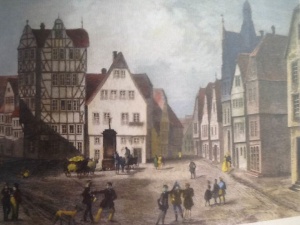 Giessen, the young Follen brothers led the ‘Giessen Blacks’ so called for their attire, their long black cloaks. Theology student, Friedrich Münch, had come from the small nearby village of Nieder Gemünden, just as his father and older brother Ludwig had before him, to obtain his education. Educated at home by his father, George Münch, the young man felt as if a strange new world had opened before him, as he was caught up in the desire for change. There he would meet Paul Follenius, whose family from Romrod in Hesse were leaders in this radical movement.

Friedrich Münch hurriedly pressed his own education, in order to allow his younger brother Georg an opportunity follow, as the family could not afford both young men’s education at the same time. While a student though, Friedrich became involved in the radical movement sweeping the youth. Both Friedrick Münch and Paul Follenius had had their name entered in the Government’s ‘Black Book’ and were under suspicion. When caught, and one’s name was listed, your offense was entered, with the admission and promise to never repeat such an offense. With the admission of such guilt also came the agreement that the government had the right to execute one for their offense. This was soon demonstrated when Karl Sands, who had stabbed and killed the official Kotzebue, was executed. Everyone was under the watchful eye. And when Münch who had left the University, had requested permission to tutor at his father’s church, he was told that such permission would be granted “if he agreed to snitch and report on his friends and the Follenius family.”

Karl Sands’ actions had reflected on his mentor Karl Follen (1796-1840). (Two of the Follenius brothers, Karl and August, had shortened their name to Follen.) Follen had written a small treatise that suggested that a safe haven, a refuge or place to disappear could be found in the new young country of America. If a small seed, such as a University, could be founded – perhaps a colony could arise. Colonization was not a new idea, and had been used by ancient governments as a peaceful intrusion in new lands. But before Karl Follen could follow through with his own plan’s suggestion, he was forced to quickly flee. First to Switzerland, then France, before coming to Boston in the U.S.. There he served at Harvard’s first German professor. Soon, others would be pressed by the government, as they were cast under suspicion for their activities.