On January 1, 1863, President Lincoln’s Emancipation Proclamation came into effect, freeing slaves in all Confederate-held territory. But Lincoln’s decree did not extend to Missouri, Kentucky, Tennessee, and Maryland, all of which were slave states that had remained loyal to the Union.

In 1864 some of the Missouri Germans backed an attempt to challenge Lincoln from the Left by nominating a Radical anti-slavery man for president. When Lincoln outflanked them by endorsing the 13th Amendment ending slavery, the Germans returned to the Republican fold and put their energies into revising the Missouri constitution to abolish slavery in their state

Legal freedom for all African Americans slaves in Missouri came by action of a state convention meeting in the Mercantile Library Hall in St. Louis. The convention convened

on January 6, 1865 with German immigrant and abolitionist Judge Arnold Krekel serving as president. Radical Republicans, many of whom were also German-Americans, comprised two-thirds of the convention seats. A vote on the “emancipation ordinance” passed overwhelmingly 60 to 4 on January 11, 1865, with no compensation to slave owners. A month later the convention adopted the 13th amendment to the U.S. Constitution, which abolished slavery throughout the country.

Eight of the sixty-six delegates to the Missouri Constitutional Convention were born in Germany. One of the immigrants, Arnold Krekel, was elected Convention President. 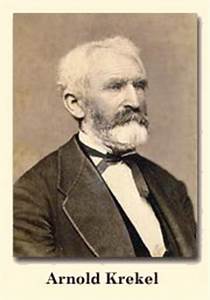 While nearly all native-born Republicans believed that Missouri’s blacks should be freed, the status of blacks in freedom was contentious. Many thought that blacks, if they were free, should not be given the right to vote. Even among whites, women and young people under the age of 21 were not allowed to vote. One could be both a citizen and be deprived of the privilege of voting in 19th Century America.

The St. Louis Community College’s program THE GERMAN ABOLITIONISTS AND THE CIVIL WAR explores the relationships between the Germans and the enslaved community that they worked to emancipate. The program will be at the Missouri History Museum, on Tuesday, October 16, 2018 at 10:30 am in the Lee Auditorium will have speaker Dorris Keeven-Franke, Executive Director of Missouri Germans Consortium. The program is free as always and open to the public.