Today I am going to share a letter from my friend Neil Heimsoth, explaining how the German Immigrant Memorial came to be at Cole Camp, Missouri. 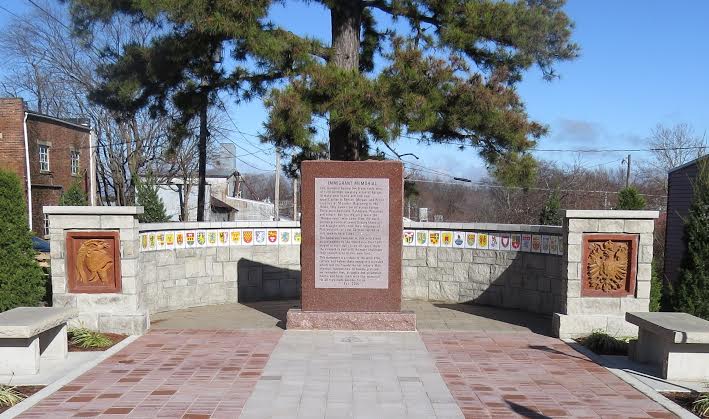 “Several years ago, my wife Marilyn and I attended a conference of the Nord-Amerikanisc he Saengerbund in Sterling Heights, Michigan,  a suburb of Detroit.  On the grounds of the  Carpathia Clubhouse, there was a beautiful memorial to the German settlers of that area.  I was so impressed with it that I began thinking of our own situation.  I also remembered that Loose Creek, Missouri  had also erected a memorial about 20 years earlier.  In 2009, we purchased an old house in the downtown area to use for my art gallery.  Adjacent to the house was a vacant lot.  I began making sketches for an immigrant memorial, and shared these ideas with my good friend, Bob Owens.  Immediately following WWll, Bob was hired by the State Department to work in Berlin. The city was cleaning up the rubble from the devastation of the war, and Bob salvaged two magnificent icons which where were originally ornaments on some old building.  He had these shipped home and now they were sitting in his backyard.  He suggested that if I could use them as part of the design, he would donate them.  Today they are located at each end of the circular wall of our memorial.

A committee was assembled from members of our Low German club, and the club agreed to sponsor this memorial project, making all contributions tax deductible.   To finance this, we sold engraved bricks. The design contains a circular masonry wall, four feet tall, which encompasses the immigrant area containing gray 8”x8” engraved bricks with a number, name of immigrant, hometown, Missouri county of settlement, and year.  (This is limited to those who settled in Benton, Morgan, and Pettis counties.)   In front and centered in this area is a large red granite memorial stone, containing a dedicatory statement on the front, and on the back, a small map of Germany with provinces outlined and Lower Saxony hi-lighted, because the vast majority of our immigrants came from there. The largest feature on the back is an enlarged map of Lower Saxony with all 38 districts outlined and the names abbreviated.  These 38 districts are each represented by a small porcelain plaque containing the coat-of-arms in color and mounted on the circular masonry wall.  In the front area is the descendant area, made up of engraved bricks with the names of descendants and descendency numbers from the immigrants.  This is the feature that most of our people really appreciate.  This is how it works:  My great-grandfather is shown on immigrant brick 12.  My brick in the descendant area has my name and the numbers 3-12, indicating that I am the third generation from immigrant number 12.  My children are 4-12.

This project has been very enthusiastically accepted by the public and makes a very attractive addition to our town, and will be formally dedicated on June 11, 2016.”