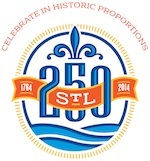 When Peter Roloff of maxim Films of Berlin, Germany asked historian and writer Dorris Keeven-Franke “what still existed of the German heritage in Missouri?” she was a little surprised, knowing that there is still so much that  exists today. Film and documentary producer, Roloff had first learned of the Giessen Emigration Society in 2004, from his friend and script writer, Henry Schneider. Roloff and several other friends, soon formed the Reisende Sommer-Republik in Bremen, around their interest in this group of Germans and what had become of them, holding annual conferences, film festivals, and other cultural and artistic events. The creative group is composed of artists, film makers, historians, writers, and archivists.  In 2009, the Traveling Summer Republic visited Missouri for first hand investigation. Roloff filmed their research trip, and in 2010, “A Trip to a Forgotten Utopia” was first released in Bremen, Germany, then in Dutzow, Missouri, to large audiences. In 2011, the group returned and the tour and photo exhibit at the Missouri Journalism Hall of Fame in Washington, Missouri, “Utopia Revisited”, generated greater interest. Other events, such as “Bold Moves” in Missouri followed, creating an even larger interest.

In 2012, plans began for the Exhibition: Aufbruch in die Utopie: Ausstellungsreise auf den Spuren einer deutschen Republik in den USA, which opened November 1, 2013, in Giessen, Germany. On April 6, of 2014, it will reopen in Bremen, Germany, once again sharing with Germany this once forgotten group.  Then it will travel as the original Society did, by ship to the United States.

In September, 2014, the Exhibition: Utopia: Revisiting a German State in America will open at the museum of the German-American Heritage Foundation in Washington, D.C., sharing this interesting story nationwide. After two months in our nations’ Capitol, it will travel to St. Louis, Missouri, and open at the Missouri History Museum on November 22, 2014. The exhibit is in both German and English and tells the amazing story of these early immigrants, what they thought, the challenges they faced, and the nativism they endured. It shares the history of the Society founder Friedrich Muench and his work as a writer and as a statesman, to continue the Society’s original effort. It explores the impact that the Germans had on Missouri’s involvement in the Civil War and their anti-slavery movement.  The visitor not only becomes involved in what these early emigrants faced, but what it means to be an immigrant in the United States today. The utopian ideal is explored, and participants invited to share their ideas of what Utopia means today and to their future. Another unusual concept that is found in the exhibit is its’ own archives, where everyone is invited to read the thousands of pages of research collected and used in the exhibit, the accompanying book and documentary.

Germans first began emigrating to Missouri in groups, and the Giessen Emigration Society was the largest such group ever organized in Germany to come here. They have played a huge role in St. Louis’ history, and will be featured in the STL250 event calendar. (For more on St. Louis’ 250th Anniversary see http://www.stl250.org/) The Society members came from all religions and all walks of life. This was not a religious orientated society even though Muench had served as a Protestant minister in Germany. The Society was politically motivated, and its members felt that they would find a better life for all of their families. Today, many descendants of the original Society members can still be found, a testament to the stubborn strength and fortitude of these early emigrants.