Young students from schools in Bremen, Germany have worked with the Utopia exhibit since its’ first opening in Giessen, Germany as TANDEM GUIDES. Familiar with the story of the exhibition, they assisted with tours and created performances and programs. Next they hosted students from Bremen, Germany where it was open from April to July at the St. Stephanis Kulturkirch. These students from Bremen became TANDEM GUIDES as they learned from their peers and assisted with the exhibit while it was on display in their city. Now these students from Bremen, Germany will visit St. Louis, Missouri in February 2015, bringing their vision of Utopia. While familiar with the issues of emigration and immigration, they will have opportunities to exchange their ideas with Missouri History Museum‘s TEENS MAKE HISTORY program.  This project is possible for these German students through the assistance of private donations in Germany and the United States; and in Missouri by the St. Louis – Stuttgart Sister Cities Program.

TEENS MAKE HISTORY, an award-winning, work-based learning program developed at the Missouri History Museum, was created to help fill a fundamental need for quality after-school experiences. Research shows that access to after-school programming has a profound effect on not only decreasing juvenile crime rates, but also increasing graduation rates and enrollment in higher education. The History Museum is looking to bolster such programs for students who are 16 to 18 years old.TEENS MAKE HISTORY was launched in 2007. Initially, participants in the program researched, wrote, and performed plays in the Museum’s galleries. The plays were seen by 3,600 visitors in 2009 and more than 4,000 in 2010. Beginning in 2011, the program expanded to new areas of the Museum, allowing teens to serve as apprentices in the marketing, research, exhibits, education, and digital media departments. This expansion was born out of a desire to serve a larger number of young people. Since then, we have added 12 new members to the program, and plan to continue to provide valuable experiences to those participants as the program ages and grows.

In February 2015, the TANDEM GUIDES from Bremen, Germany will visit St. Louis, Missouri and the meet the participants of the TEENS MAKE HISTORY program at the Missouri History Museum. They will be spending time together discussing the issues surrounding immigration, and what their visions of what would be a Utopia today. Young people sharing culture, history and ideas, through this international program, builds a better future for all generations.

Student from Missouri meets students from Bremen, German in November 2013.

Students from Bremen Germany at the Utopia Exhibit at St. Stephanis Church. 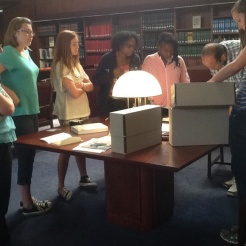 Esther Steinbrecher from Berlin, Germany visit with the Teens Make History in August 2014.