The Fifth Season begins today!! After the 12 days of Christmas, what’s next? winter sets in with its frigid fury. Trying to hibernate like a Polar Bear will only last so long. Then you remember that back on November 11th, at the 11th hour, that the Council of Eleven announced their plans for the Karneval Season! While suspended for Advent, which was a great distraction, has ended with the Three Kings visit on January 6th, the Twelth Day of Christmas. Now what? It won’t be long and Lent will begin in preparation for Easter. Germans and German-Americans begin to plan one big week of Karneval while they can. The next four weeks build in anticipation! If you are a Missouri German and want to enjoy Karneval in 2018 visit http://stl4stuttgart.com/

There are different words in German for the Carnival or “Mardi Gras” Season: Karneval, Fasching and Fastnacht. Although all three refer to the same pre-Lenten holiday season,  they each reflect the regional customs and traditions in Germany. Missouri’s Germans have immigrated from all over Germany for the past 175 years. The Fifth Season in St. Louis is most commonly referred to as Karneval and began back  on the 11th of November !

In Germany Karneval is the word used for the Rhenish (Rhineland) version of carnival in northwest Germany (except in Mainz), while the word Fasching refers to the similar celebration in southern Germany and Austria. The term Fasching is also seen and heard in Berlin and other parts of northern Germany. Fastnacht, mostly used in Swabia and 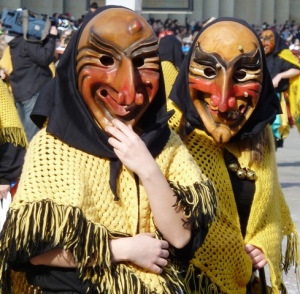 Switzerland, is also used in the northern city of Mainz. However, that still does not mean that these words are interchangeable. Karneval, is a more modern (17th century), Latin-based word borrowed from French and Italian. The true origin of the word is uncertain. The German word used to be written with a C rather than today’s K-spelling.

The Carnevale in medieval Venice is one of the earliest documented carnival celebrations in the world. It featured still-popular traditions, including carnival 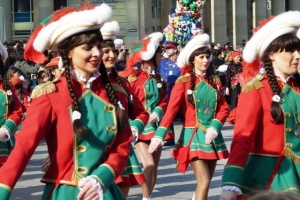 parades, masks and masquerade balls. Gradually the Italian Carnevale customs spread north to other Catholic European countries, including France. From France it spread to the German Rhineland and, through colonization, even to North America (Mardi Gras). The word Fasching dates back to the 13th century and is 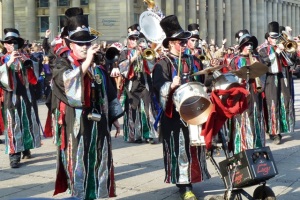 derived from the Germanic word vaschanc or vaschang, in modern German: Fastenschank refers to the last serving of alcoholic beverages before Lent. In the 19th Century the 40-day Lenten period of fasting was strictly observed. People refrained from drinking alcohol or eating meat, milk products and eggs. The English word “fast” (to refrain from eating) is related to German fasten. And according to GermanWay.com “Fastnacht, refers to the Swabian-Alemannic carnival, which differs in some ways from Fasching and Karneval, and is found in Baden-Württemberg, Franconia (northern Bavaria), Hesse and much of Switzerland. Although this word looks like it comes from the German for the “eve of Lent,” in fact it is based on the Old German word fasen (“to be foolish, silly, wild”). Thus the word, sometimes spelled Fasnacht (without the t) actually means something like “night of being wild and foolish.”

In Germany parades are a big part of the celebration. The big day for Karneval is the Rose

Monday parade, whereas the big Fasching parades are usually the day before, on Carnival Sunday. But according to some sources, one of Germany’s biggest carnival parades takes place in the northern German city of Braunschweig… “Schoduvel” (“scaring away the devil”), …which dates back to 1293.

Karneval begins on November 11th
Many carnival organizations traditionally begin their official activities on November 11. Then it is suspended for Advent… and reconvenes in January. It is only following the Christmas and New Year’s season that carnival preparation really gets underway.

Organizations begin planning carnival balls and building floats. If there are any events on November 11, they are brief and only serve as a mini pre-carnival. Very little related to carnival happens between November 12 and January 5. No matter the name, almost all carnival observances end at midnight on Shrove Tuesday. The next day, Ash Wednesday, is the official start of Lent, even if very few people today actually fast until Easter. Historically, the purpose of carnival was to live it up before the start of Lent and its 40 days of gustatory sacrifice.

Karneval in the United States

From GermanWay.com: “There are a few places in the USA noted for their carnival observances. The most famous, of course, is New Orleans and its big Mardi Gras. That has a lot to do with the French influence in Louisiana (which was named for the French king Louis XIV). Lafayette,

Louisiana also has its own Mardi Gras, as do Baton Rouge and several other Louisiana towns. There are good-sized carnival celebrations in Mobile, Alabama (since 1703!); Fredericksburg and Galveston, Texas; Biloxi, Mississippi and in Pensacola, Florida (dating from 1874). The Mardi Gras celebration in St. Louis, Missouri is a relatively recent development that only began in the 1980s. What began as a private party at a bar has now become a rather large event with corporate sponsors.”  See STL4Stuttgart.com for more information and tickets to the highlight of the Karneval Season in St. Louis.