I first encountered Ralph Gregory in the early 70s when he was still curator at the Mark Twain Birthplace Memorial Shrine. My husband and I had just moved to Warrenton, and I had seen a notice of a meeting of the Warren

County Historical Society at the Prudential Bank meeting room. I didn’t know the man across the room, angrily pounding his fist on the table because the Society was rejecting a donation of a historic building, but I really liked him.  Ralph had come to Warrenton that night just to make sure everyone knew how he felt on the issue apparently. No one in the room seem much surprised at the tirade. I never forgot my first encounter with Ralph Gregory, the preservationist.

Ralph and his wife Adele (Brehe) Gregory would later move to Marthasville, with their daughter Nancy. I would start a family and become a busy mom of three. Then in the 80s, while I was co-chair of the Committee planning Warren County’s Sesquicentennial, I really got to know Ralph. After all, you couldn’t talk about history in Warren County or Franklin County without Ralph Gregory. A true historian.

Next came my first book, and Ralph was there, urging, suggesting, proofing, reading, and I knew the book wouldn’t be just right, if he didn’t write part of it. He wrote on two of his favorite subjects for me, Daniel Boone, and Friedrich Muench. It

was 1990, and this was Ralph Gregory the writer. He had published hundreds of newspaper articles, countless books on history and his other favorite subject – philosophy. He taught me to triple check my sources, yet keep an open mind.  I admired him, and  loved nothing more than a good philosophical debate over a historic topic, where we would each race to prove our theory right. Ralph loved writing, and always had one of “his projects” in the works.

In the mid-90s, another preservation crusade brought Ralph, and his wife Adele, and me even closer. Adele had had a stroke in 1993, which had left her wheelchair bound. When the issue of the 1871 Warren County Courthouse came to a head, Ralph was right there, pounding his fist once again, demanding the building could be saved. The loss devastated me, but Ralph, he would never give up. Whether it was the Washington Turner Hall, or the Pottery Barn down on Main, he never gave up. That was Ralph, with his tenacity and will power.

His Passion for German Heritage

But it was the love for the history of the German emigrants that really did it. He loved Deutsch Country Days in Marthasville for how it kept the heritage alive.  We spent hours, discussing, debating, and theorizing. He shared all of his translations of Friedrich Muench’s work with me. He taught me how he had started, by taking a German English dictionary, and slowly word by word, doing the translation. After a while you begin to remember and recognize and it goes faster. Pages and pages of his handwriting, I would later transcribe and type up and we would discuss and share. I couldn’t get enough. Ralph always said “the day you quit trying to learn, you might as well quit living.” That was Ralph’s secret to a long life, as he was questioning right up to the last.

In 2009, I was asked to share some of this history with Germans researching the Giessen Emigration Society, called the Traveling Summer Republic.  They wanted to hear the story, and see what remained of the German heritage. I couldn’t wait to tell Ralph, who had just turned 100, that  they were coming! He was the first person I would introduce them to. We spent hours recording him, listening to his thoughts on philosophy and  history. Generously he shared everything, all of his

translations, his books, his research. Ralph is an essential part of Utopia – Revisiting a German State in America. I heard that one person questioned, why we had living people’s pictures in the exhibit. Without Ralph’s contributions, so much of the history would be missing.  His passion, his love of history, and his generosity made it possible. And from the first scene of his in A Trip to A Forgotten Utopia, Germany loved him too.

There is no way to sum up a friendship of over 30 years. He was more than a mentor, he was a friend. His zest for life will be missed. Not only by myself, but by people all over the world. With his twinkling blue eyes, he brought history to life. And Ralph would not want to see us sad. With his books and his writings, he will always be there for us, urging us on, to make sure on our sources – at least three – and to never give up. Rest in Peace Ralph, you may be gone, but you will never be forgotten. 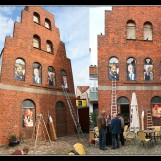 2010 in Fundamt Bremen – Ausstellung Trip to a Forgotten Utopia

My daughter Autumn with Ralph at Deutsch Country Days

Ralph and me in 2014 at Deutsch Country Days

The Ralph Gregory desk in the Utopia exhibit featured Ralph.